Illinois doesn’t come up frequently when you’re talking about United States fisheries unless you’re talking about the very tip that gets some of the action coming out of the great lakes. That doesn’t mean the fishing is horrible, though. In fact, it can be action-packed, and there are some records that exceed the nation’s average for a variety of species. Illinois currently holds the largest CERTIFIED blue catfish record in the country (there are larger blue catfish, but none have been certified and officiated).

While Illinois is home to a plethora of native fish species, and a few that were brought in intentionally or otherwise, we’re going to focus on the bass species you can find and their current records.

Try to pick up some of the patterns you’ll see in these top 9 bass fishing records set in Illinois. We’ll talk about them a bit more at the end.

The largemouth bass record is not one of the nation’s most impressive records, and it is extremely long standing. It was caught in 1976 at Stone Quarry Lake, and it only weighed 13 pounds and one ounce. That’s considerably smaller than the records in prime largemouth spots such as California and Georgia. However, it’s still a massive largemouth, and the vast majority of anglers will never, or very rarely, catch one of that size.

The problem here is that it has been the record since 1976. That might be from Illinois not having an extensive record-hunting community or reputation for largemouth bass of extraordinary size. It’s possible that some competition has been caught since then, but wasn’t taken in for recording. However, as with all longstanding, low-weight, records, it could be a long time before this one is beaten, too.

The Smallie record in Illinois isn't the largest in the country, but it is definitely well above what many other states claim as their trophy catch. This 7-pound 3-ounce Smallie was a recent catch, too.

With this being a more recent record, and one that made headlines, there's more information on it, too. The fish was caught on a NED rig; a fairly new type of rig that is essentially a SENKO with the tip cut off and a NED jig or nail weight punched into the clipped end. They've been fairly effective since they started being used, and seeing in nab a record Smallie is further proof that anglers should be trying them out. We'll talk about that some more later on, though.

Another neat note about this catch is that it came right after a long-standing record, and it’s not likely to last nearly as long as the last record.

The last Smallie record was also caught at Lake Michigan’s Illinois bank, and it weighed 6 pounds 7 ounces. The record was set 37 years ago. However, between the new approach to fishing with a NED, and the fact that Lake Michigan has been ramping up its Smallie production over the last few years, the record was beaten, and it will likely be beaten again as the last several spawns of Smallies.

Rock bass isn’t a true bass species, but they are plentiful in Illinois. Almost every random watering hole has plenty of them, and it’s not too hard to catch some of the bigger members of the species.

This Illinois record was caught in Aux Sable Creek in 1987, and it weighed 1-pound 10 ounces. That's not huge, because the national record for rock bass is 3 pounds. However, it is much heavier than average for the species, and the fact that it falls behind the national record so much shows there’s plenty of room for an improvement with the record.

Unfortunately, rock bass isn't often seen as "record" fish. So, many anglers toss them back. If you catch a big one in Illinois' waterways, see if it's bigger than the current record, and go get it certified. It's one of the easier ways to get into the record books. 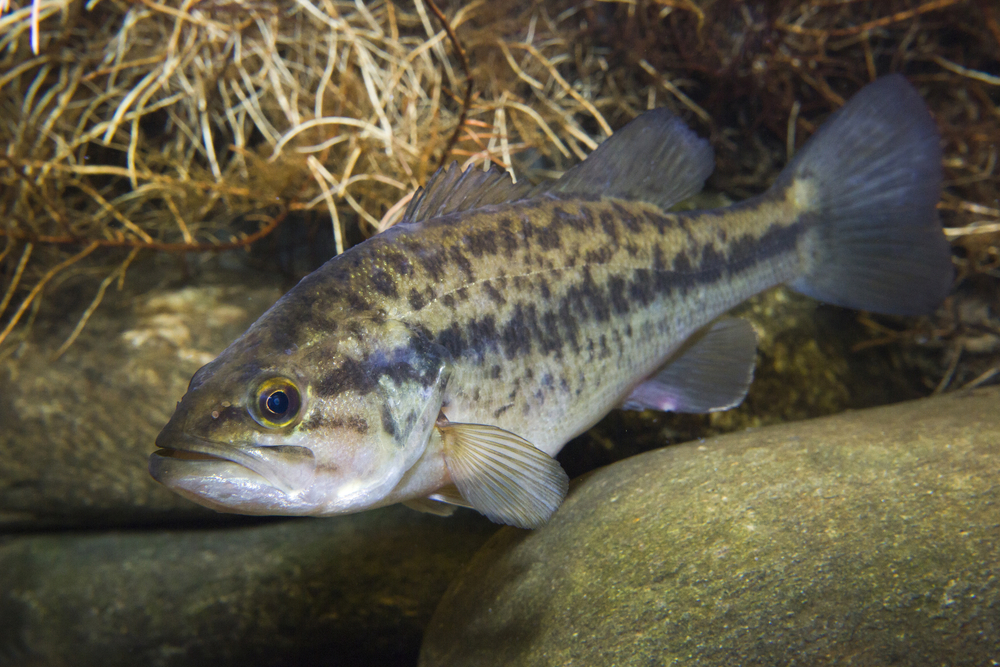 The spotted bass record for Illinois is one of the more impressive ones in the country, even if it’s not the largest. It’s a whopping 7 pounds 3 ounces, and it was caught in 1992 at Strip Mine. This is towards the heavier side of the spotted bass growth range. So, it’s no wonder the record has lasted for so long.

That doesn’t mean the 30-year-old record can’t be beaten, though. The national record is just slightly over 11 pounds. So, there is a bit of room for you to beat it in a practical manner.

The striped bass record for Illinois isn’t very impressive. At 31 pounds, it would definitely catch the average fisherman off guard, and it would outweigh the vast majority of other fish caught in the state. However, the national record for landlocked striped bass is 69 pounds. So, Illinois is quite a way behind. That does make sense given its Midwest location, though.

This fish was caught in 1994 at Sangchris Lake.

Hybrids are basically what you get when the striped bass we mentioned previously, and the white bass we’ll talk about next, are allowed to live in the same waterway. They procreate, and they create an odd fish species that is kind of a middle-ground between the two.

The white bass is the second half of what makes a hybrid bass. While striped bass is massive and often reaches more than 50 pounds with ease, white bass is usually between 2 and 5 pounds. In fact, the national record is just under six and a half pounds.

Illinois’ white bass record is 4 pounds and 14 ounces. That’s at least fairly close to the national record while still having room for someone to beat it without having to set a world record.

The fish was caught in the Kaskaskia River in 1981.

Yellow bass is a lot like white bass. Except they have a little tinge of yellow in their markings. They’re about the same size, too. So, the 2-pound Illinois record isn’t too shocking. The record was set in 1984, and no one has reported a yellow bass record larger than that since. However, like a lot of panfish, yellow bass isn't seen as anything special. So, bigger fish might have been caught and thrown back.

The odd point about this record is that it was caught in an unnamed farm pond. Most states do not allow private farm pond catches to count toward records. The fact that Illinois does open up some neat possibilities for anglers.

Yellow hybrid bass is another odd species that comes from yellow bass mating with similar species. These aren’t like striped hybrid bass, though. They certainly don’t reach 25 pounds, either.

The Illinois record for yellow hybrid bass is just shy of 3 pounds. It’s 2.93 pounds to be exact, and it was caught at Rend Lake in 2008.

What Can Be Learned from These Records? 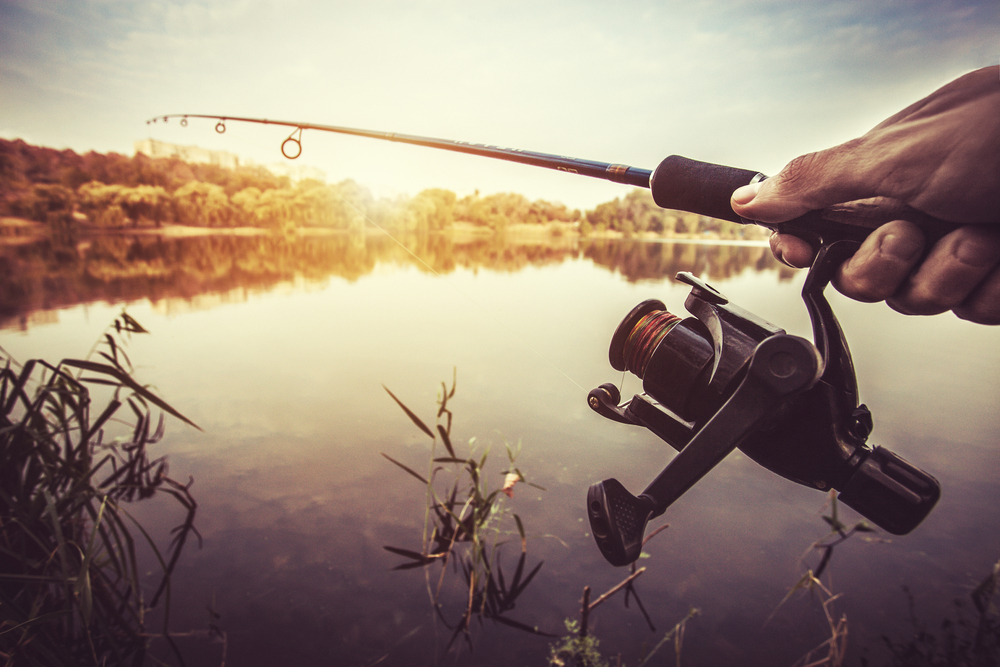 Illinois has some decent fishing. Most of it isn’t going to turn any heads for championship anglers unless they’re into some of the larger catfish species, but there’s still plenty of action to be had.

Here are some things that we gleaned from the record books.

Illinois tends to have more bass and pseudo-bass species than a lot of other states. Almost everything is covered in the record books, and while they’re not the biggest ever caught, there is a large variety.

One of the good things about a state not having massive bass records is that it’s practical to beat the records and enjoy the competition.

Bass don’t infinitely grow. There are anomalies like the fish George Perry caught and the new world record, but those aren’t normal catches, and their weight is also heavily dependent on several factors such as their recent diet, time of year, speed of the weigh-in, etc. Long story short, there is a limit to how big a bass can get.

The closer you get to that limit, the harder it is to beat a record ever again. When a state has records that aren’t exactly all that impressive, you actually stand a chance at catching a fish within the natural size range and getting in the record books.

Location is Important, but Not the Be-All-End-All

Illinois’ records are set all over the state. Yes, the more impressive records are set in or near Lake Michigan, but some records, such as the yellow hybrid bass record, are set in Rend lake down in Southwestern Illinois. The fishing isn’t even all that great at Rend Lake, and it still set a state record. You don’t have to fish at one or two spots to get your name in the record books in Illinois.

How to Get into the Illinois Bass Fishing Record Books

Illinois has 11 rules when it comes to applying for a record. We’ll go over each one now.

Fish must be caught by licensed anglers, and only line and reel catches are counted. You cannot use trotlines, jugs, nets, or any other type of equipment to catch a record fish.

Pay Lakes are Not Allowed:

You cannot apply for a record with a fish caught at a pay lake. The fish there are heavily stocked to create artificially productive fishing experiences, and it is not fair to put them in the record books.

When length and girth measurements are made, they must be made from tip to snout. This is handled at weigh stations. So, you don’t need to worry about this as much.

The Illinois Department of Natural Resources can deny your application based on its investigation. This typically isn’t a problem, but if you have a controversial catch, or you haven’t supplied enough information per the guidelines, you should expect the IDNR to reject your application. If any serious offenses are noticed, you might face legal consequences.

There is a list of fish eligible for submission. You can’t just report any big fish in Illinois, as all fish aren’t considered trophy worthy. The Grand Slam award is exempt from this.

If you’re applying for the Master Angler Award, you must submit your photograph and application by January 30th. Some record categories allow for indefinite application turn-in, but this is limited due to the competition’s annual nature.

Most record categories require a clear side-view photo of the fish and angler along with the submission. The angler isn’t required to be in the photo, but it is highly recommended.

As an added note, the IDNR does assume ownership of the application and photograph. So, make sure you make a copy for personal use and don’t try to sue them if you find it in a newspaper or broadcast. You sign the rights over by submitting it.

You can use a personal scale to see if attempting an application is even worthwhile, but you must have your fish officially weighed on a certified scale before you apply. This is standard practice for most states. Luckily, meat shops, some grocery stores, and some tackle shops all have certified scales. You can also find them at any staffed fishery.

You must have two witnesses present when performing your certified weigh-in.

The IDNR will want to identify your fish, and you must keep it intact even after the weigh-in if it has not been checked out by an IDNR official. If the fish deteriorates, a flesh sample might be required.

Finally, the IDNR can reproduce images of you and the fish as much as they want. They get full rights to the images submitted and your application once you submit it. You do not get royalties or any other sort of payment because of these reproductions and distributions.

If you want to maximize your fishing experience and set a new bass fishing record in Illinois, download BassForecast fishing app - the #1 anglers’ tool!