What’s the World Record for Largemouth Bass? The Top 15 Bass Ever Caught

When it comes to bass fishing, it’s all about the sport of it. As you almost certainly know, bass anglers are out for a brain-bending hunt for big bass and what they want to eat, an unforgettable fight, and a stellar photo at the end of it.

However, before any bass angler starts to resuscitate their catch and watch it swim back off to fight another day, there’s one important detail that has to be gauged for any of it to mean anything: The size.

Any good fisherman will take plenty of pleasure in simply enjoying a nice fight and lipping a fish, but there's something about the thrill of reeling in a massive bass after it has jumped all over the surface and put your equipment through the wringer.

Today, we're going to talk about the top 15 largemouth bass ever caught; including where, when, and how they were caught. Using this information, and of course, building your own skills and intuition as an angler might just help you land the next record-shattering largemouth when you hit the water.

Buckle up, and let the history lesson begin. 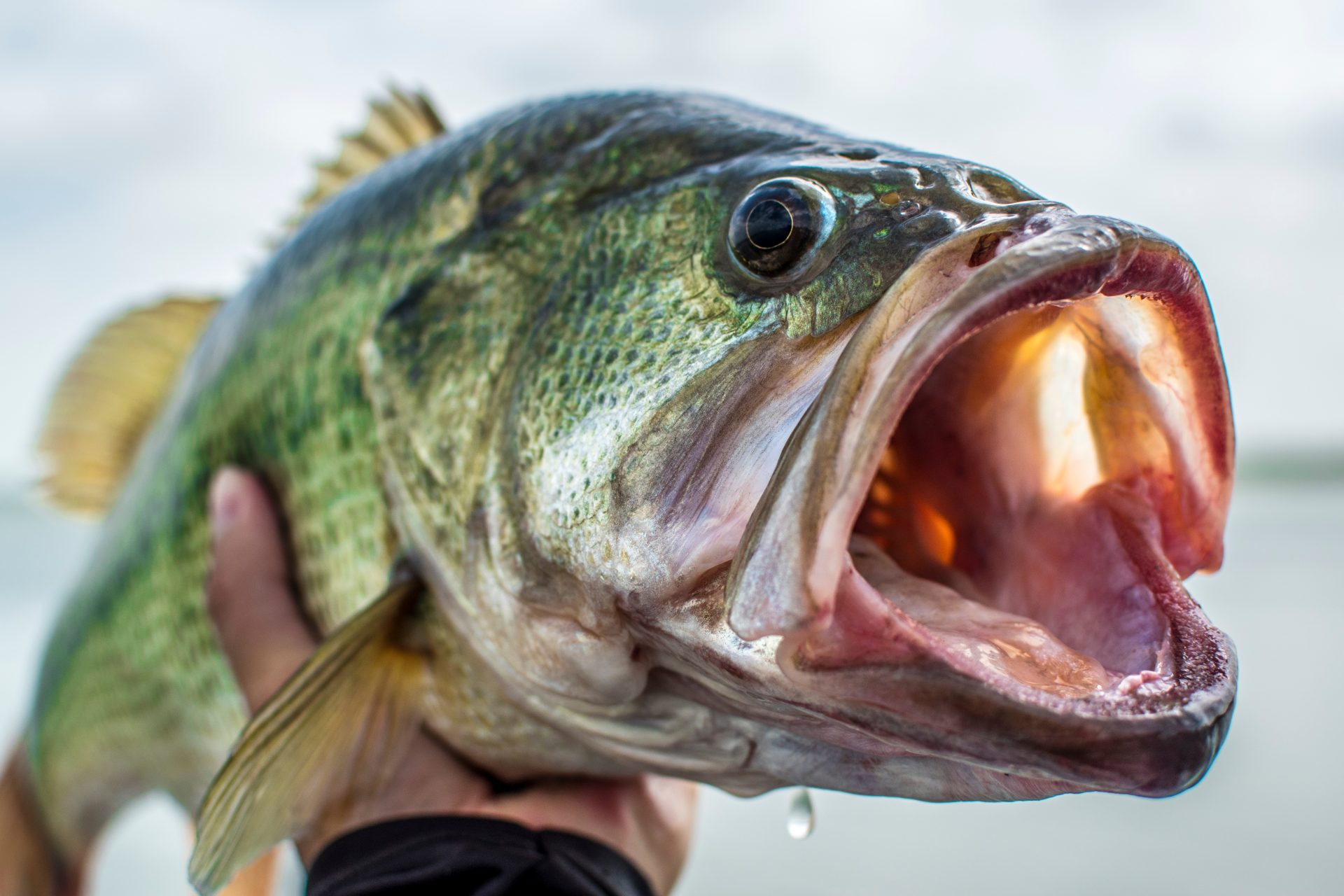 First up is the current world record. This impressive 22.311-lb bass was at Lake Biwa in Japan. This is the largest recorded largemouth bass ever caught, and what makes the catch even more impressive is the low number of largemouth in Japan. This is because they were introduced specifically for sport fishing. After a short time, they were labeled an invasive species, and they’re only found in a few select lakes that have now had their native ecosystems ravaged by the predators.

The angler that pulled this bad boy in is Manabu Kurita. He pulled the lunker in with a Deps Slide Swimmer 175 in 2009 at the age of 32. He has since tied his own record in 2022.

This one goes way back to 1932 when an angler by the name of George Perry caught a 22.25-lb largemouth at Lake Montgomery in Georgia. What makes this record so special isn’t that it’s a world record. Those are beaten by mere ounces across the fishing community all the time. No, this is special because it was the world record for largemouth bass from 1932 all the way until 2009 when Manabu Kurita nabbed the current world record at Lake Biwa. A little over two decades more, and he would have had a century-long world record. More importantly, this was from before sport fishing was big. It was a way to secure food, and anglers weren’t using the most advanced techniques and equipment back then.

Perry caught the monster on a Creek Chub Fintail Shiner; the only lure he and his friend had at the time of the catch.

This is the third-place record as of this writing, and it was made at Castaic Lake in California on March 12, 1991 by Robert Crupi. This whopper weighed 22.063 pounds, and it was just slightly shy of beating the 1932 record George Perry is famous for. Unlike the other records, Crupi didn’t use lures for this impressive catch. It was just good old-fashioned live bait on a basic float rig.

Being in the top three without using a fancy lure is a huge accomplishment, and you’ll be happy to know that Robert Crupi is still angling in the L.A. area now that he has retired as an LAPD officer.

Another impressive catch was made at Castaic Lake in 1991; just seven days before Robert Crupi broke the 22-lb mark, Michael Arujo had caught a lunker weighing 21.75 pounds. That wasn’t quite close enough to George Perry’s long-standing record, but it was a massive breakthrough for the lake, and it is the fourth largest bass ever caught and officially recorded.

Arujo made the catch of his life with two different bummers attached to it. He was just shy of the world record, and a week after getting lauded for the second largest bass in the world, Robert Crupi came in and knocked him down to third place in the same watering hole. It’s a great catch, but you know that one had to sting a bit.

This 21.688-lb lunker was, like over half of this list, also caught in the Los Angeles area of California. A trend you’ll be noticing pretty quickly with the world record list.

While the bass is just shy of the 22-lb mark, it stood out for its unique spotted pattern and acquired the nickname “Dottie”. Dottie was caught in 2003.

Raymond Easley's 21.2-lb largemouth turned heads in 1980 as the first bass to breach the 20-lb range since George Perry's legendary catch. While Easley's catch isn't the thing of legend, it is still a record holder. It's the largest largemouth bass caught on an 8-lb line as of the time of this writing. It's also worth noting that he wasn't bass fishing at the time. He was teaching less experienced friends how to catch crawfish, and he happened to get lucky.

Yes, the third-place world record holder is actually known for multiple catches. Just a year before he came close to dethroning George Perry’s age-old record, Robert Crupi caught a 21.1-lb largemouth bass at Castaic Lake, California; not far from where he’d later catch the 22 pounder he’s known for. Again, he’s one of the few world-record anglers to use live bait for their catches, and he’s one of the few with two records to his name.

Dave Zimmerlee caught a 20.938-lb largemouth at the Miramar Reservoir in California in 1973. This was not quite as close as Crupi’s catch in 91, but it was the first catch to get somewhat close in 40 years. Not only that, but it was the California state record and held its position for a fair amount of time.

Yet another Castaic Lake record, this catch by Leo Torres happened shortly before Crupi’s first 21-lb catch. Unfortunately, it wouldn’t last long as it was still in the 20-lb range at 20.86 pounds. Still, it was the catch of a lifetime shared by few anglers, and it’s yet another testament to the high catch potential of Castaic Lake.

This 2001 catch was made at Lake Dixon, California by Mike Long. The catch was 20.75 pounds; just mere ounces behind the area’s top records, and it’s one of the top records at Dixon’s watering hole.

This is Lake Hodges first appearance on this list, and it happens to be its largemouth bass record. Gene Dupras boated a 20.25-lb largemouth in 1985 on artificial lures and put the watering hole’s name on the map. While this is on the lower end of the 20’s, it’s still an important catch in the bass fishing world.

This 20.25-lb catch by Johnny Garduno in 1990 is tied with the number 11 spot placed by Gene Dupras, but it doesn’t hold the reservoir record as that was accomplished in 1973 with a 20.983-lb largemouth. Still it is the catch of a lifetime for the angler, and it’s just ounces off of the watering hole’s record; proving big bass aren’t just a fluke at Miramar.

Florida is known for some good bass fishing, along with some unique species of bass besides largemouth. So, while this is the one and only largemouth record from Florida on our top 15 list, it’s worth noting that the state pops up frequently with longer, more lenient lists.

This one was caught by Fritz Friebel in 1923, and at 20.123 pounds, it held the world record until George Perry set his nearly 80-year-long record.

Again, keep in mind that sport fishing wasn’t really a thing back then, and neither George Perry or Fritz Friebel would be considered professionals nowadays. They were just good old boys enjoying a bit of fishing. That’s an important detail for later.

This 2006 record isn’t the biggest in the world, country, state of California, or even Los Angeles county, but it is the Lake Mission Viejo record at 19.7 pounds. George Coniglio still holds the lake record, and there’s no denying that, even compared to the 20+ pound fish on this list, no angler would brush off a 19-pound hog.

What’s a better way to finish our list off than to return to yet another 1990 beast from Castaic Lake? On March 30, 1990, just shortly after Robert Crupi’s first record fish, Mark Balloid caught a 19.5-lb lunker that, while still a bit smaller than Crupi’s catches at the lake, was a massive accomplishment. 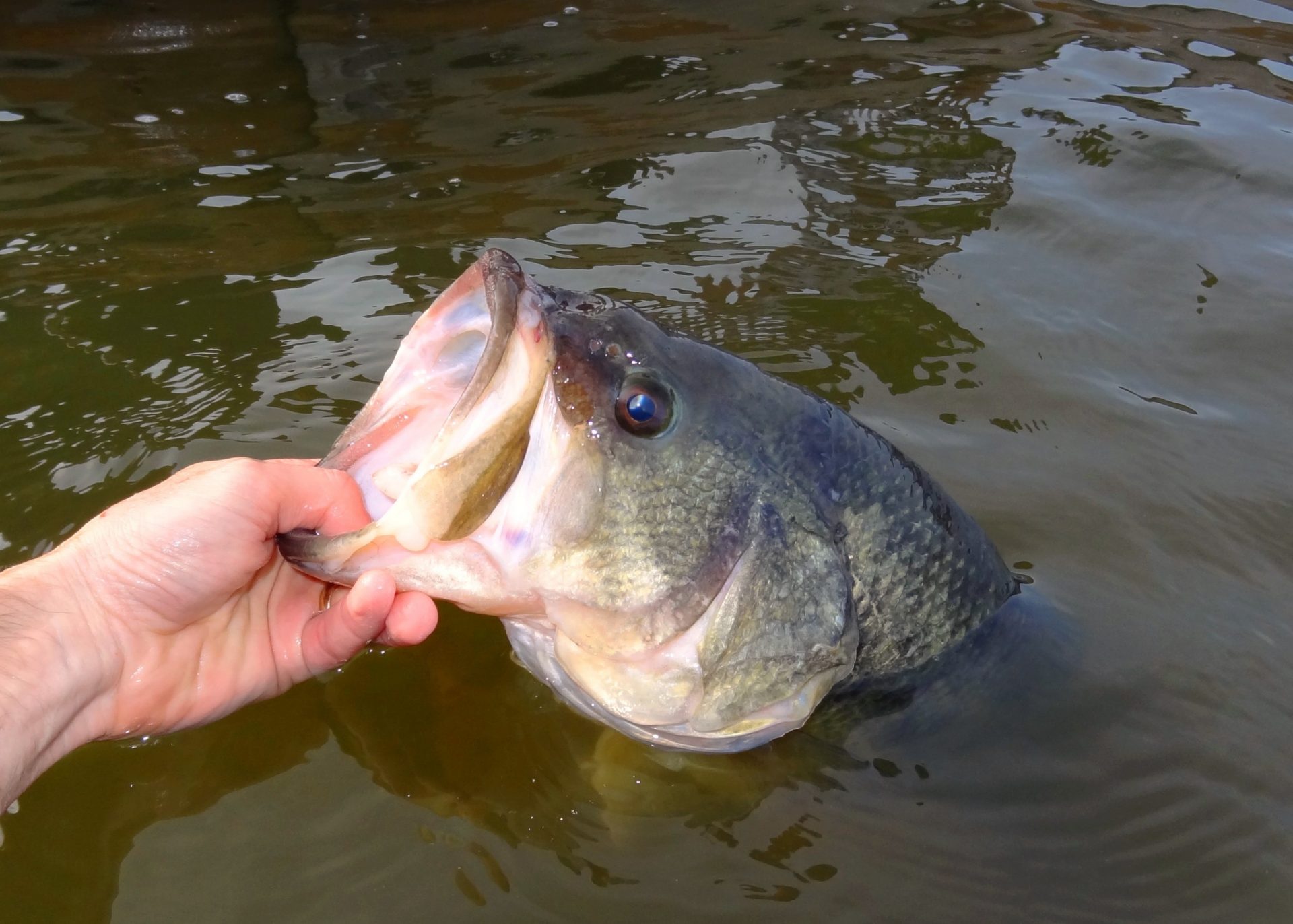 How to Use This Information

Now, besides learning about some amazing largemouth, what good is this list for you, the average fisherman? Well, as it turns out, there’s quite a bit you can learn from it.

Here are the points we believe stand out the most.

It’s Not Restricted to Gatekeeping Pros

Did you notice that two of the earliest world-record catches, and several of the more modern catches, weren’t made by professionals on $40,000 bass boats with $700+ rods? Nope. They were caught by regular fishermen who, sometimes, weren’t even trying to catch record-breaking bass.

The point to understand the most from this is that the record holders involved knew how to react to the hard fights those 19 to 22-lb fish were putting them through, and even with the 1920s and 30’s equipment, they were able to work those basses back to their boats. George Perry, the man with the longest-lasting world record, and who is still in second place globally, caught his lunker in a homemade boat with the only lure he had on him. He stated that he wasn’t worried about losing the fish, but he didn’t want to lose his Creek Chub.

You don’t need a second mortgage and a very angry wife to pick up the big fish. You just have to know what you’re doing when they bite.

What makes the current record so impressive isn’t just that it broke George Perry’s almost century-old record. It’s that it happened in Japan where largemouth isn’t even native.

If you noticed, up until that point, the entire top 15 list is comprised almost entirely of Californian lakes and reservoirs, and a couple of names pop up several times to dominate the list. Notably, Castaic Lake shows up a lot.

If you want to catch big bass, you can do that anywhere there is bass. Kurita proved that by shattering George Perry’s long-standing record. However, your chances are quite a bit higher if you find the waters known for producing such abnormal bass specimens.

Unfortunately, that same concept can lead to higher pressure from other fishermen. Everyone wants the world record with sport fishing, and you won’t be the only one running to a well-known watering hole.

Pressure Increases, and Catches Go Down

If you notice, the predominant body of water on this list has basically all of its notable entrees set in the early 90’s. Not a single Castaic Lake record of real notability has cropped up since.

That doesn’t mean big fish aren’t found there, but it given its history of producing jaw-dropping trophy bass and the drop off, it’s safe to assume that “something” has put a damper on what the lake is producing.

That damper is typically waves of fishermen, both responsible and irresponsible, attempting to get in on the trophy-sized action.

This increases pressure and makes fish more finicky, and if the water is being overfished or the fish aren’t being released properly, numbers can drop; effectively ruining what the hole was known for.

Keep that in mind, and don’t always hunt your next trophy at a certain hole just because it’s famous.