If you’re looking for top-notch bass fishing, there are several states that stand out, and they’re constantly brought up. Namely, Georgia and Texas tend to be the first ones anyone talks about. However, Mississippi also has some of the country’s best bass fishing.

Its large rural waterways that aren’t two feet away from toxic development projects and parks that leave fish pressured 24/7 make for some amazing breeding ground, and the bass tends to get fairly large.

While the state record isn’t quite up there with the world record or some of the California bass fishing records, it is pretty substantial, and it’s one even most professional anglers will never come close to.

So, without any more rambling, we’ll get into not only the largemouth record everyone is here for, but some of the other bass fishing records in Mississippi have proudly entered the books, too.

First, we’ll start off with the record most of you are looking for, and it’s a pretty big one. The largemouth bass record in Mississippi is 18.24 pounds. The world record is only a few pounds heavier than that, and bass in that weight range is exceptionally rare. In fact, they’re so rare that it took almost 100 years to get up to that point once the first one was caught. So, an 18-pounder is definitely a once-in-a-lifetime fish, and most anglers will never see one.

This particular 18-pounder was caught by Anthony Denny in 1992. The fish was caught at Natchez State Park Lake. Again, once fish in this size range are caught, it tends to be a long time before the record gets broken. So, this 1992 record is relatively young compared to how long it could last.

Also, this isn’t normal for Mississippi. It’s not an everyday catch anywhere, but in Mississippi, most anglers don’t manage to catch anything over 11 pounds. Compare this to somewhere like California, where basically every local waterway has a record higher than 15 pounds, many of which are really close to the world record, and you can understand that Mississippi's record isn’t exactly representative of its average production. So, don’t head to Mississippi expecting to catch anything close to the record without a lot of luck and experience.

The good thing is that the record proves that Mississippi’s mid-range bass can exceed what local anglers expect and get up there with the states that consistently produce massive bass. That’s far better than states where the bass fishing is frequent and average, but the record is no better than an average catch.

The smallmouth bass record is another impressive one for the state. It’s a whopping 7-pound 15-ounce Smallie caught by Thomas Wilbanks in 1987. That’s a fairly long standing record, and it makes sense. This isn’t the largest record in the world, but it’s better than a lot of states, and the world record is only slightly over 11 pounds. So, it’s definitely up there, and it’s larger than the personal best of your average angler.

The good news is that, even if it hasn’t happened in a while, there is room for a new record without having to rely on a miracle. There is a solid 4-pound difference between this fish and the world record, and plenty of fish in the 8 and 9-pound range are caught regularly around the country.

This 8-pound 2-ounce spotted bass record is an impressive one. In fact, it’s right up there with the world record, and it’ll easily be far harder to beat than the previous two records we looked at. The world record is 9 pounds and 2 ounces. It was caught by Locke E.

There are a few things to consider with this record. Locke E is known for massive spotted bass in Mississippi, and it consistently produces 7-pound bass even for anglers who don’t necessarily know what they’re doing. That might make you think this will be an easy one to beat, but we don’t think so.

This is so close to the world record that it’s right up there with how large a spotted bass can possibly get, and the closer you get to that limit, the longer it tends to take to break a record just by ounces. This is most like a record you can reasonably get close to but are also highly unlikely to overcome regardless of how skilled you are.

That isn’t just an issue for Mississippi anglers, though. It’s likely an issue everywhere. Don’t let that discourage you, though. With a little luck, there’s still a solid pound between this fish and the largest known spotted bass in existence. So, there’s room to beat it.

How to Get in the Record Books

Obviously, getting in the record books requires you to beat one of the current fishing records. However, it’s a little more complicated than just catching a big fish and gloating.

So, if you want to beat bass fishing records in Mississippi, here’s a list of the things you need to do to make sure the record is taken seriously. 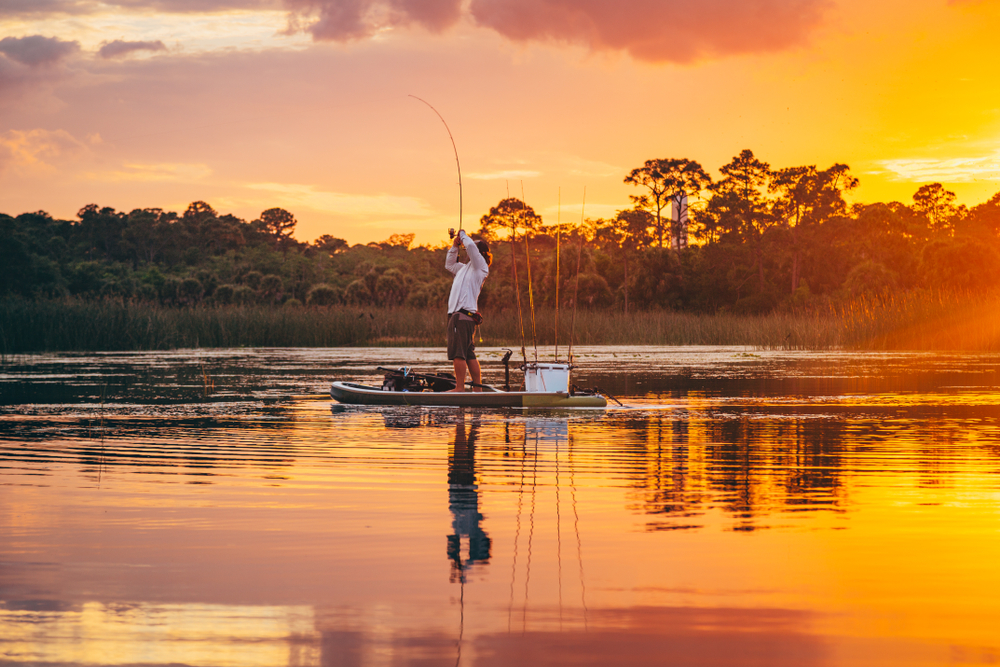 This is the most basic requirement. The fish does need to be weighed, and in most cases, your personal scale isn’t going to be taken seriously.

You can get an official weight in a few ways.

First, tournaments will automatically be taking down weights and preparing to go through the officiating process. After all, the entire point of a tournament is to get as many people targeting record-breaking fish as possible. This is probably the simplest way since the company holding the tournament will be handling it for you.

The other ways are done outside of tournaments.

Most notably, you can go to a certified scale. These are available at most tackle shops, wildlife centers, and park centers. So, if you weigh your fish on the water, and it is exceeding the current record, take it to the nearest official scale.

Finally, you can have your personal scale officiated. This is not done by most states, but it is part of the world record process. There is a non-refundable $40 fee, and your scale has to be inspected and approved before you can use it for world-record purposes. If it is, you’ll have to record the weigh-in on video, and then it will be compared to the current database. Again, most states don’t operate like this, but on the global scale, the extra flexibility is needed to ensure anglers aren’t missing out on world records because of a lack of global record officials nearby.

You do have to have a valid Mississippi fishing license before you try to claim any records. This isn’t a big deal, because you need one to fish in the first place. Illegally fishing and bringing your catch to a weigh-in station is a great way to get in legal trouble, and that’s if the game and fish warden doesn’t catch you in the act, anyways.

There are exceptions to this rule.

Children younger than the license requirement do not need a fishing license to go fishing or report their catches.

It is worth noting that catching records on private bodies of water, where the owner isn’t required to have a fishing license, is highly suspect. Some states have gone ahead and allowed those catches to enter the record books, but it’s not a guarantee. Think of it like a pay lake that is intentionally maintained to have ridiculous amounts of fish that are unnaturally large. The owner can do whatever they want to get larger-than-natural fish or use fishing methods that aren't allowed otherwise.

This typically isn’t a big deal. You just need to be able to provide the gear you caught the fish with in most situations. That’s because there are different types of records available. It’s not always about who caught the biggest fish overall. There are records for catching specific fish with fly equipment, ultra-light gear, length records that disregard weight, etc. So, a lot more details will be looked at.

Sometimes, this helps dispel claims made by other anglers, as well. People do cheat. Just recently, some tournament fishermen caused a major storm in the community by plopping lead weights into their fish before the weigh-in. In the past, weights have been used, dead floaters have been turned in, and fish that were stunned and netted off the top have even been turned in. So, while not necessary to prove the catching method outside of targeting specialty records, it can be useful to prevent jealous anglers from calling foul.

With CPR being the most supported and accepted fishing behavior among sport fishermen, this one can get a little difficult. However, it is necessary to get the fish to a regulated officiation station (the same place you can get your fish weighed).

There are methods to do this without having a 100% chance of killing the fish. Many anglers opt to use a live well with proper aeration technology mimicking the natural environment, and that does provide a good chance of survival if the angler is quick to get the fish weighed and checked out. It’s not 100% effective, but it does help.

Tournament fishing is probably the easiest way to pull off a CPR record, though. You’re already keeping the fish alive until weigh-in, and once the fish are officially weighed and checked out, they can go right back into the water. Again, it’s never 100% sure to keep a fish alive if you’re dragging it around and stressing it out, but this is an even more effective option compared to tossing it in a live well and driving all the way to a weigh station. Besides, you’re not getting a 100% success rate, even if you practice CPR immediately. Bad hooks or even just the stress of the fight can unfortunately lead to dead fish.

Because of all of this, it’s best to only attempt to have a fish weighed if there’s a solid chance it’ll beat the record. Make sure you weigh the fish with your own scale before committing to getting it weighed, and better yet, if the record isn’t that important to you, take some quick photos and release it for the next spawn. Bringing every random big fish you’ve caught to a weigh station puts unnecessary stress on fish that usually aren’t going to beat anything.

What to Learn About Mississippi Bass Fishing from These Records

There are some things you can learn about Mississippi bass from these bass fishing records. First, the largemouth doesn't typically get anywhere near the record size in Mississippi. Most local anglers max out their personal best at 11 pounds. Luckily, the larger catch proves that Mississippi can produce those above-average whoppers serious anglers target.

Then, you have to consider the spotted bass record. It’s so close to the world record that it’s unlikely to be beaten for a while, and if it ever is, it probably won’t be by much. However, the fish consistently get right up to that state record at multiple high-profile spots. So, if you want to target the spotted bass record, or just catch giant spotted bass, Mississippi is the place to do it.

Finally, with Smallies, Mississippi is fairly average. The record is high, but the average catch is on par with any other Smallie-stocked location.

Check out our fishing app and easily find all the best spots to target your next record-breaking fish.